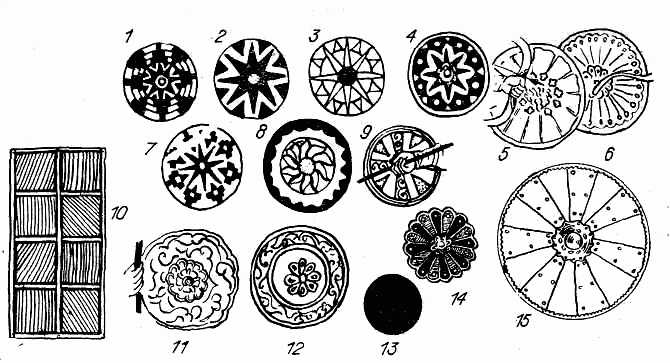 Acquired before 1859. From the armoury of Hagia Irene, Istanbul. Purchased via Robert Curzon, c.1842. Lent to the British Museum 1914, returned 1954.
The shield is of iron. It is engraved and silvered with Arabic inscriptions. Around the boss there is an inscription in cursive script in 4 cartouches with silvered backrounds. They read 'The Sultan, the king helped (by God), the crown of the believers, Ulugh Beg Mirza'.
On the body of the shield around the outside of the boss, there are another 4 cartouches of similar design. They read 'perpetual glory', 'and prosperity, and wealth' 'and wealth' 'and might'.
Another 11 cartouches of similar design can be found around the border of the shield. They read 'The one who honours, my Lord, Oh the Greatest Sultan, the Exalted Emperor, the Master who curbs the great ones (?), the Master who curbs nations, my Lord, Oh the Learned Sultan, and ....'. Between these bands of inscription the ground is ornamented with arabesques, originally further elaborated with overlay in silver. Inside the shield is a large iron handle, centrally placed and six rings held by floreate washers on the outside. Around the rim at close intervals are small copper headed rivets.
Dimensions: The diameter of the shield is 458 mm. Weight: The weight of the shield is 1.665 kg.
The inscriptions were read by Kalus, (in Gladius 1980 pp.20-25), who notes that differences in style and accuracy and in the location of the silvering on the inscriptions on the boss as opposed to those on the rest of the shield suggests that the boss came from a seperate workshop. He speculates on the attribution of the shield to Ulugh Beg, but reaches no conclusions. They were read again my Manaji Bayani in 1994, who confirmed the attribution of the boss to Ulugh Beg. Ulugh Beg reigned as Timurid sultan from 1447-9. The boss was probably fitted into the shield when it was made, for the iron hand grip appears contemporary with the rest of the shield, and covers the rivets of the boss. Although the sultan to which the titles refer is unnamed, it is probably Ya'qub (r. 1478-90).

A RARE OTTOMAN TURKISH SHIELD, EARLY 16TH
CENTURY
of convex circular form, fitted at its centre with a separate boss of low ogival form decorated with twelve shallow flutes radiating from a later central spike issuing from a large ornamental washer and retained at the rear by a nut and smaller washer, the boss surrounded by four large and thirty-five smaller bosses (one of the latter replaced), probably representing working-life additions, of oval form decorated in each case with six radiating panels of incised chevrons, one of the smaller bosses partly overlying the Ottoman ownership mark, the shield bordered by numerous round-headed lining-rivets (six missing, the remainder replaced) and fitted at its rear with fragmentary remains of later leather enarmes (showing some losses at the edges, a patched repair, three minor perforations and pitting overall) 52.6cm.; 20N in diameter
Inv. no. A106.
The shield is proved by its ownership mark to have derived from the Ottoman Turkish arsenal, housed, until recent times, in the church of Hagia Eirene (St Irene), Istanbul (formerly Constantinople). Although a substantial part of its original contents remain in Istanbul today as part of the city’s Askeri Müze (Military Museum), many pieces were sold from the arsenal in the 19th and 20th centuries, and found their way into European and American collections. Photographs of the arsenal taken in its original home in 1889 show it to have originally included many shields of the kind catalogued here (see S. W. Pyhrr 2007, figs 3-6 &, 13). A finely decorated example is now to be seen in the Royal Armouries Museum, Leeds (see H. R. Robinson 1967,
pl. X, A), while another was exhibited in Paris in 1988 (see H. Ricketts & P. Missilier 1988, Cat. No. 3, p. 154, ill.).