It’s hard to imagine how many weapons have passed through Howard Dixon’s hands. An arms and armor specialist with Christie’s Auction house for over 20 years, Dixon has seen it all. But one piece – a 600-year-old Italian broadsword – has long evaded his gaze. The Harriet Dean sword is one of the last remaining swords from the arsenal at Alexandria, and in 1943, it disappeared without a trace. Lost to legend, the medieval blade has been hunted by academics and enthusiasts for the better part of a century. Until now.
“Stunned disbelief.” These are the words Dixon uses to describe the moment the pieces started to fall into place. The day started much like any other: Dixon was to meet with a regional representative to look over a folio of arms consigned for sale. But it was there, in a Texas restaurant, on an ordinary day, that he saw the Harriet Dean.
“I recognized the sword instantly as a medieval broadsword, but it was the Arabic inscription which set my pulse racing,” he says. “[But] I was taught to be cautious over items that appear too good to be true, and generally the condition of these Alexandria swords falls into that bracket.”
Medieval swords tend to resurface corroded and beaten, either pulled from a riverbed or excavated from deep underground. But Egypt’s hot, dry climate, Dixon explains, kept the Alexandria swords pristine through the ages. “Once we established that it was a genuine example, and started digging into the provenance, its significance became very apparent. I just couldn’t shake the feeling that we had stumbled across something very special.”
The inscription on the sword perfectly matched a description of the Harriet Dean published in a 1937 paper on the swords of Alexandria. “These swords were given either in tribute or as diplomatic gifts by the King of Crete to the Mamluk rulers,” says Dixon. “This particular piece formed part of a diplomatic gift in 1419 during a period of relative peace.”
How did a sword forged in 15th-century Europe find its way to the United States? By wondrous coincidence. Many of the Alexandria swords were lost over the years, taken as booty in the battles between Christian and Muslim armies, but the Mamluk arsenal remained intact. The collection eventually made its way to a military museum in Constantinople, and it was from there that the Harriet Dean began its maiden voyage across the Atlantic.
“After the First World War, Dr Bashford Dean, the founding curator of the arms and armor department at the Metropolitan Museum of Art in New York, made a buying trip around post-war Europe,” says Dixon. “And on that trip, he visited the military museum.”
The sword wasn’t on display, but rather sat in a repository filled with medieval swords and armor. Upon his arrival, Dean combed through the various pieces, penning as much information about each as he could.
“Beyond documenting some of these discoveries, he was able to purchase items,” adds Dixon. “Including two very similar broadswords, which are actually pictured together in a photograph taken in the late 1880s. These two swords remained in his possession until his death in 1928 when one was bequeathed to the Met and the other to his sister, Harriet. Since this time they have become colloquially known as the Bashford Dean sword and the Harriet Dean sword.”
The Bashford Dean remained safely locked in the Met collection, but upon Harriet’s death in 1943, its sister sword was sold at auction, its whereabouts to be concealed for 72 years.
“It’s just astonishing,” says Dixon. “Here you have this 600-year-old piece. The way it sits in the palm of your hands… A great sword should have poise and balance, and for a relatively large sword this felt special. The blade has been forged by a master craftsman with perfect weight distribution, and the pommel, which acts as a counter-balance, complements the blade. If one had to rely on this sword in battle, it would certainly have instilled a sense of confidence. I consider myself very fortunate to have had the opportunity to spend so much time with this great sword.”

the straight double-edged steel blade steadily tapering towards a fine tip, with a straight and perpendicular cross-guard, the hilt with leather grip surmounted by a disc-shaped pommel, inscribed at the blade, with the St. Irene arsenal mark and further crusader marks
125.5cm.
‘One of what was made anew in the days of our master, the king of commanders al-Sayfi al-Nasiri Aristay (Sayf al-Din Aristay). Made a bequest to the armoury in the protected port of Alexandria’
This fourteenth-century sword, as well as being an exceptional example of its kind, provides as fascinating testimony of the Crusades and the manner in which arms employed in the conflict passed through diverse hands.
This type of sword generally associated with Italian or German manufacture, belongs to a small group of weapons deposited in the eastern Mediterranean, a rare survivor of the Christian and Muslim crusading battlefields. This sword, however, is extraordinary for its condition and for the range of insignia and inscriptions it displays, which provide a clear insight into the individual history of this object.
The presence of the Maltese cross, engraved three times in circles along the length of the blade, reveals the original purpose of this sword. Adopted as the emblem of the Knights of St. John, this distinctively religious sign – the eight points of the cross representing the eight Beatitudes pronounced by the Sermon on the Mount – declares a militaristic ambition, as the symbol of a Christian solider-brotherhood who waged war for the control of the Holy Land. The presence of these engravings on this fourteenth-century sword firmly places this weapon in the context of the crusades.
Invoking the name of Sayf al-Din Aristay, the governor of Alexandria between December 1400 and May 1401, the engraving commemorates the donation of the weapon to the Mamluk arsenal of the city, during the brief appointment of this public official. After being forged in Christian lands, the sword evidently fell into the hands of Muslim warriors; indeed, the academic Ludvik Kalus notes that many similar swords of typical form, with lengthy double-edged blades and disc-shaped pommels, were presented by Mamluk fighters to this armoury during this period, in an act of religious ritual (Kalus 1982). An engraving beneath this, of a zoomorphic, horselike form, bears a similarity to two swords, including one in the Nasser D. Khalili Collection (Alexander 1992, pp.76-8, no.32) which have also been ascribed to the governorship of Sayf al-Din Aristay.
Other insignia marked on the reverse of the blade bear witness to the sword’s further travels from this arms storehouse in Egypt. Two circular, abstract stamps, located beneath the hilt, record that the sword was later deposited in the church of St. Irene in Istanbul. Enclosed by the outer walls of the royal Topkapı Palace, St. Irene was used as an arsenal by the Janissary corps of Sultan Mehmed II, after the Turkish conquest of Constantinople. This holy, Byzantine edifice became the repository for an entire corpus of Crusader swords, similar to this lot, which were captured as booty by Islamic Crusader armies, to be inherited later by the Ottoman Empire.
For similar inscriptions, see Kalus 1982, pp.42-45 and Alexander 1992, p.76, cat.32. 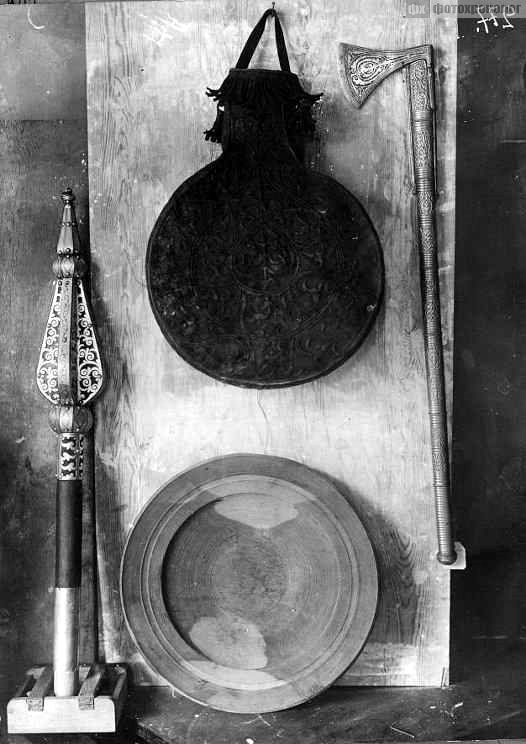 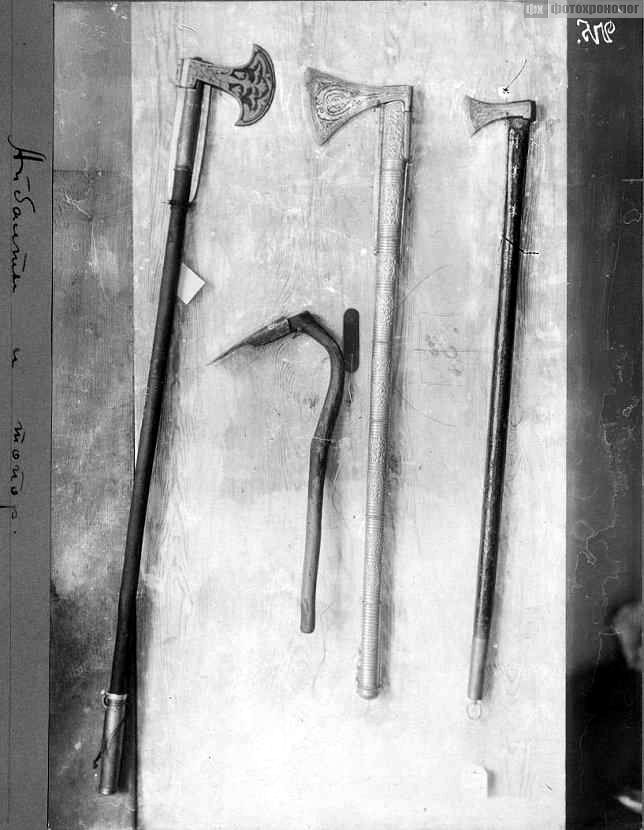