Persian Miniature Painting and Its Influence on the Art of Turkey and India [Hardcover]
Norah M. Titley 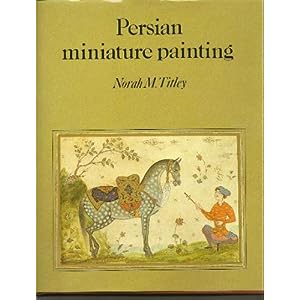 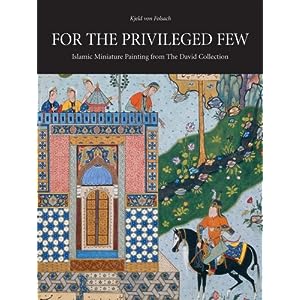 Islamic miniature paintings have historically been produced as both illustrations for books and as discrete works intended to be kept in an album. The techniques used in their making share similarities with the Byzantine tradition of miniature painting and have recently shown up in some contemporary artists' work as well--including Shahzia Sikander's. For the Privileged Few is published on the occasion of the Louisiana Museum of Modern Art's thorough Islamic miniature exhibition, spanning from the thirteenth through the nineteenth centuries, which originated at The David Collection in Copenhagen--famed for its selection of Islamic art. With 185 full-color images, most of them plates, this volume is an important addition to the existing scholarship on the subject. Text by David Collection Director Kjeld von Folsach explains the primacy of this group of artworks--which includes both book illustrations and discrete paintings from the last 800 years.

The Sultan's Procession: The Swedish Embassy to Sultan Mehmed IV in 1657-1658 and the Rålamb Paintings


In 1657 King Charles X Gustaf of Sweden sent Claes Rålamb as an envoy to Sultan Mehmed IV's court. While he was there Rålamb commissioned 20 large paintings in oil on canvas, depicting an imperial procession through Istanbul in September 1657, providing a revealing insight into the court of Sultan Mehmed IV in Ottoman Turkey.
For the first time Rålamb's paintings are published here in 'The Sultan's Procession'. This beautifully illustrated book - containing over 150 colour illustrations - comprehensively covers the full history of the paintings, including a technical analysis from the conservation of one of the paintings. The book also provides a full history of Claes Rålamb and his mission, including the political background of the Swedish embassy, Rålamb's biography and English translations of primary sources in Swedish and Turkish archives. Among the illustrations are over 100 watercolours of people in the Ottoman society from the costume album acquired by Rålamb in Istanbul.
These unique Rålamb paintings provide a rare window into life at the Ottoman court in the 17th century.

Suleymanname: The Illustrated History of Suleyman the Magnificent
Esin Atil 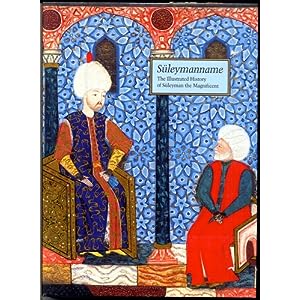 Suleiman, the great sultan who reigned (1520-66) over the Ottoman Empire's greatest expansion, is commemorated in this beautiful facsimile edition of the early illustrated manuscript now housed in the Topkapi Palace Museum, Istanbul. The volume completed Arif Celebi's five-part official history of the Ottoman dynasty in Persian verse. Five imperial court painters illustrated Suleiman's life and achievements in 65 scenes. Reproduced here, resplendent with gold, are their renderings of battles, receptions, hunts, and sieges. Atil carefully describes the artistic production and binding of the manuscript, as well as its political, historical, and cultural significance. Essays, text accompaning each plate, indexes, and appendixes provide many points of access to the contents of the Suleymanname. For art, history of the book, and Asian history collections. Ann Copeland, Drew Univ. Lib., Madison, N.J.
Copyright 1986 Reed Business Information, Inc.

http://www.washington.edu/uwpress/searc ... RILOO.html
The Look of the Book
Manuscript Production in Shiraz, 1303-1452
Elaine Wright


The Look of the Book assesses the role of the city of Shiraz in Iranian book production between the early fourteenth and mid-fifteenth centuries. It is the first detailed analysis of all aspects of the book - illumination, codicology, illustration, calligraphy, and binding - during this significant era when the "look of the book" was transformed. Four periods of change are identified: the years following 1340, until the end of Injuid rule in Shiraz; the later 1350s and the 1360s, during Muzaffarid rule; the years from 1409 to 1415, when the Timurid prince Iskandar Sultan was governor of Shiraz; and the decade (1435-45) following the death of Ibrahim Sultan, Iskandar's cousin and successor as governor. Although the focus is Shiraz, the author's comparative and chronological approach to the material means production elsewhere in Iran is also considered, while the results of the study increase our understanding of the history and development of the arts of the book not only in Shiraz, or even Iran as whole, but also in other centers of the Islamic world that followed the Iranian model.

Highlights of this book, which is heavily illustrated with exquisite illuminated manuscript pages, are its examination of illumination, an overlooked area of book production; the codicological aspects of the manuscripts, including paper and text layout; and the development of nasta'liq script. The manuscripts studied are held in more than fifty collections, primarily those in Dublin (Chester Beatty Library), Istanbul (Topkapi Palace Library and Museum of Turkish and Islamic Arts), London (British Library), Oxford (Bodleian Library); Paris (Bibliothèque Nationale de France); and Washington, DC (Freer and Sackler Galleries of the Smithsonian Institution).
Elaine Wright is curator of the Islamic Collections at the Chester Beatty Library in Dublin, Ireland.

Kalila wa Dimna (or The Fables of Bidpai) is one of the gems of world culture, having been translated through the centuries everywhere from China to Spain. The stories of Kalila wa Dimna, like the Fables of Aesop or Lafontaine, are subtle and suggestive moral tales—a kind of repository of wisdom and understanding about the human condition. It was the most commonly illustrated medieval Islamic text. This book focuses on the group of seven Persian manuscripts from the second half of the fourteenth century, which contain several of the finest masterpieces of Persian painting. It is a work of enormous erudition and scholarly importance, a huge contribution for art historians and students interested in Persian painting and early Islamic art. In a world now besotted with images, these superb early paintings can give us a glimpse of the power and delight that they must have given their original viewers, and help explain the work’s attractiveness throughout the ages. “These pages will remain forever as a basic tool for all further work on this particular text and as a model for the study of illustrated manuscripts in general”—Oleg Grabar, Institute for Advanced Study, Princeton